Why You Need More Than Social Media

With the advent and rapid growth of social media, many small businesses grew to believe that setting up a Facebook page and posting a couple of times a week would suffice for all of their communications needs. Unfortunately, that is not true. Yes, social media is now a staple in modern communications. Both between businesses and between individuals. There are many factors to consider when creating your company’s communications plans.

Social media is not one size fits all. Different demographics use different platforms. And, they use those sites in different ways. If you are trying to target a younger audience, setting up the standard Facebook page may not be your best bet. Though, “Facebook remains the most widely used social media platform by a relatively healthy margin: some 68% of U.S. adults are now Facebook users,” according to the Pew research center, younger adults tend toward platforms like Snapchat and Instagram.

The Credibility of Social Media

With the recent Facebook data scandal, social media consumers may be thinking a little more about how much time they spend on Facebook. It may also affect how companies advertise to consumers on the platform and use data collected from the site. Of course, so far the #deletefacebook movement hasn’t had the radical effects on social media usage people may have thought.  Recommendation: keep an eye on public sentiment changes toward social media in the future.

Traditional media has been portrayed as dated.  Also, borderline obsolete for many years.   Primarily since many Americans rely on platforms like Facebook and Twitter for their news. However, with the rampant “fake news” epidemic, studies show that Americans may be turning back to traditional news outlets for their facts. This trend toward trusting conventional news outlets is vital to your small business’ marketing and communications efforts because it means that earned media should still have a place in your plans. That’s right, a good old-fashioned press release or newspaper ad should still be in the budget. However, keep in mind that just because trust for traditional news outlets is growing, that does not mean that social media or mobile consumption of information is decreasing.

Social media is a mode of communication, meaning that it should be a two-way street. Effectively using social media for your business requires a give and take. Don’t just post some sales pitches and call it good. Create a conversation, follow people in your field, and engage customers in open discussions about relevant topics.

Creating and maintaining a thriving social media presence is still crucial to your business’ communications efforts. Social media remains a primary mode of building personal relationships between your brand and your customers. Follow Perini & Associates on social media for more information about how to put social media to use for your business (see what we did there?). 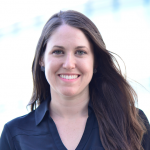 Starting her career in communications as a military public affairs specialist where she reported on everything from combat operations to life on the base. Since then has earned a degree in strategic communication from Northern Arizona University and an MBA from EDHEC Business School while continuing to work in journalism, public relations, and marketing. Melissa loves being creative and meeting new people.  She has experience in Social Media, Email Marketing Content Creation, Google Ads and Search Engine Optimization (SEO).  She is a free-lance writer for the Pikes Peak Newspapers.